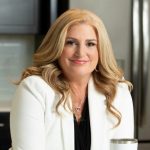 A little about me

In this entrepreneur's previous life, Carrie Courtney founded, developed, operated, and eventually sold two profitable businesses. This commercial passion paved the way to success, but it was in working with and helping people where Carrie learned her true excitement originated. That spirit naturally lead her to real estate in 2006 where she became a top RE/MAX agent and the recipient of multiple coveted industry awards. After joining forces with her husband, Dave Courtney, and two other top former RE/MAX agents, they launched a Real Estate Brokerage in 2012: Changing Latitudes Real Estate & Property Management. In 2017, Carrie became a member of the National Association of Expert Advisors™ who are trained and certified to prepare a smart home selling strategy that can sell your home faster and for up to 18% more money than the traditional real estate agent. Three years later, she was chosen as a HomeLight Elite Agent, a new standard of excellence in real estate recognizing those agents who rank in the top 1% of their markets. This is not only a highly sought-after and rare achievement, but she is also part of the Elite Agent launch group as one of HomeLight's very first members, a special honor of its own. Originally from Michigan, she has resided in Central Florida for the past30 years. When she finds spare time, she loves spending time with family and friends, especially appreciative of the time spent with her 7 grown children and traveling whenever time allows. Twenty years of experience in Real Estate have taught Carrie and Dave that when it comes to advising clients with real estate needs, identifying their desires and parameters is the first priority. Once developed, Carrie Courtney & Company employs a team approach. When asked about her Real Estate career, Carrie sums it up by saying, “It’s been an amazing run, but I think the best is yet to come.” That optimism and forward-thinking are consistently highlighted throughout Carrie’s career. Her dedication, service, expert negotiations, and a true passion for helping people with their Real Estate needs, have made Carrie the first choice among Realtors in the Florida region. Carrie has always earned clients' respect and loyalty, two of the reasons why 99.4% of her business comes through referrals. Professional, integrity-based standards ensure that her client’s best interest is always at heart. It is exactly these characteristics that will continue to make Carrie, her team, and Changing Latitudes a leading brokerage organization for years to come.